The Definitive Guide to Dining Out In Manchester We all know Mancunians love their food, and by looking at the breadth of the Manchester food scene, it's hardly surprising. As the culture of the city constantly evolves, the landscape of the food scene follows. With restaurants popping up like mushrooms across the city serving cuisines from all over the world, it’s an exciting time to live and work in Manchester.

Frequently referred to as the “Food Hub” of the North West, Manchester’s food and drink scene is amongst the fastest growing in the country. With a growth rate of 22% over the last five years according to food and drink analytics company CGA, Manchester is storming ahead of London with only 7% net growth.

Manchester’s food scene continues to boom thanks to the number of restaurants offering diners a taste of something different. Last year saw notable newcomers join Manchester’s portfolio of restaurants: Tast Catala, a Catalonian restaurant financed by Pep Guardiola, Irani-Indian restaurant group Dishoom and London Brasserie Chain The Ivy, to name but a few. The introduction of popular restaurants from other cities creates a buzz in the food scene.

If you love all things food and drink, follow this definitive guide for tips where to eat and drink across the city. From old favourites, new independents and trailblazers daring to do something different, we're exploring the food scene. Apologies in advance for making you hungry!

The history of Manchester’s food scene is a colourful one. With humble beginnings of beige pasties and Eccles cakes, to dishes from all corners of the globe being added to menus across the city. Beginning in Chinatown, Manchester’s first foodie hotspot in the city centre, the food and drink scene has continued to boom for the past 20 years. The Ultimate Guide to Discount Dining in Manchester

Manchester is the food hub of the North West. With more restaurants, food markets and food festivals than ever before, it's not all that surprising that budding restaurateurs choose Manchester as their home. The food scene is incredibly varied from the independent eateries and coffee shops of the Northern Quarter, fine dining restaurants of Deansgate and the well loved chain restaurants of the Corn Exchange, there's a lot on offer here. 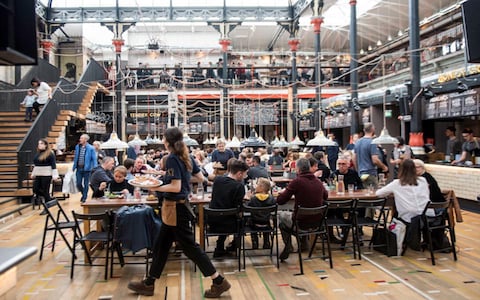 This guide features the very best of independent restaurants across Manchester In Manchester City Centre, you can't walk far before coming across a familiar restaurant front. From Piccadilly Gardens to Corn Exchange and everywhere in between, chain restaurants such as Nando's, Bella Italia and Wagamama are trusted eateries that made their millions by appealing to a large number of people. They provide a casual dining experience like no other, a home away from home! Best Places to Drink in Manchester

Originally famed for its cosy pubs and vibrant clubs (and still is), the Manchester drink scene has constantly evolved over the years. Not only is there a staggering number of pubs, bars and clubs, but the variety of the line-up is unlike anywhere else. Food always tastes better when you know you've got a bargain, and everyone loves that friend that miraculously gets the bill halved with a discount code. With hundreds of restaurants across the city offering inhouse discounts, savings and rewards, it can be a bit of a mission to navigate, even when you know which restaurant you want to visit.

Here you will find the best of restaurant discounts on a month by month basis.